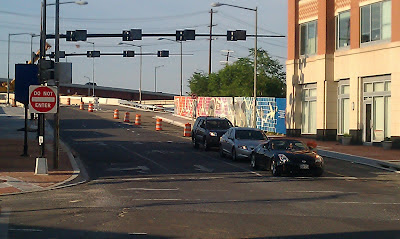 With the opening of the 11th Street Bridge, we will come
and go using this route 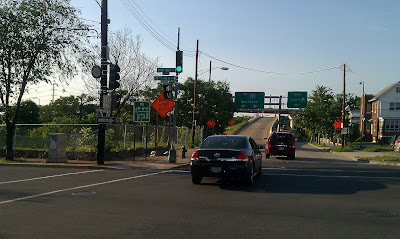 Sorry, the 13th Street Ramp is now closed. I can't wait
till DDOT actually demolishes the ramp. I'm sure the Fairlawn
Residents would agree. I hope they convert this open space to a park

Posted by CHARLES WILSON at 8:23 PM No comments: 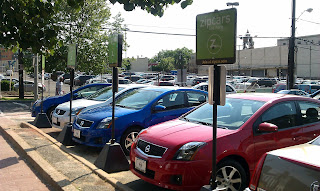 Hey, check this out. While "working from home" today I noticed that the first set of Zip Cars have arrived in Ward 8. There are four reserved parking spaces in the Big Chair parking lot. I’m happy they did not take up any street parking like what’s been done in the rest of the City.
If you want to avoid the hassle (car payments) of owning or renting a car then this program is just for you. Interested in learning more about how you can hop into one of these new shiny Nissan Sentras CLICK HERE.
I’m hearing the next set will arrive somewhere in Congress Heights. 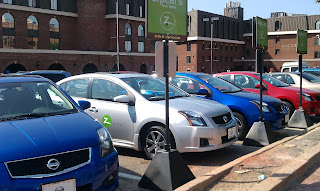 The Pandora’s Box of Lumen8Anacostia 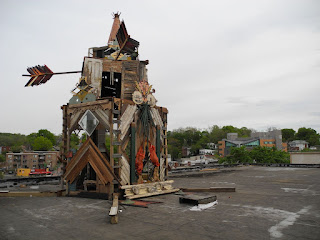 Last month, there was an awesome art-inspired festival event in Anacostia called Lumen8Anacostia.  Artists from all over the city converged on downtown Anacostia turning a normally quiet Saturday afternoon into a premier arts extravaganza.

Beyond the art, there was also great music and artistic entertainment. The event brought people from all over the city. It was a great feeling to walk up and down MLK Ave and Good Hope Rd without a care in the world and truly enjoy the neighborhood. I actually think I burned a hole in my shoes as a result of so much walking. The event provided a refreshing atmosphere for everyone to enjoy.

Volunteering all day at the event also allowed me the opportunity to catch up with other Ward 8 residents to get their feedback. Typically, these conversations fell into two categories. It was either an immediate “I Love It” or an “I Love It,” with a sense of hesitation.

The immediate “I Love It” translated into the joy of the positive atmosphere in downtown Anacostia that day and seeing the possibility of the neighborhood. The mood was set and it seemed everyone was smiling and genuinely enjoying the art, music and conversation with others.  Suddenly those vacant and boarded-up store fronts came alive with the energy of the art galleries, live music, live radio, food trucks and pop-up restaurants. 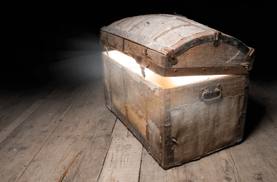 Then there were the conversations I had with those who had a bit of hesitation in their response. You see for years we have had conversations about improving the quality of life in our Ward 8 community. And while that is what we really want, we wonder if that can be achieved while keeping the core essence of our community intact. To be blunt, does this change come only with the change of the race/color of our neighbors as has been the case in Upper Northwest and other District communities where the face of improvement and change has not been that of the African American family and young professional.

Is it possible to keep the core essence of the community intact and still experience that positive change? The idealist in me says absolutely. The other side causes me to also hesitate and  wonder if this is indeed possible especially considering the severe unemployment rate coupled with the fact that Ward 8’s homeownership rate is only 30%, which means 70% of the population is susceptible to changing.

Lumen8 opened a Pandora’s Box that some of the existing community is not ready open. The only way to insure the preservation of the core essence of our neighborhoods is for the existing community gets involved in the process of not only in planning events like Lumen8, but also stressing the importance of homeownership to existing residents. When you are involved you can be deliberate in channeling the change. If you sit on the sidelines and just complain you instead will be susceptible to the change with modification.

To further the point, during the event I heard some state that this could be the next H Street, meaning they were reflecting on the success the H St Festival has had in revitalizing the area over the years. I think we are selling Anacostia and Ward 8 short of its true potential if we play copycat. The reality is that it will soon be difficult to distinguish H St, from U St, from 14th St and Adams Morgan.

We need to capitalize on what has not been successfully done and combine Art and Soul. Being deliberate about adding a Jazz or Neo Soul component with the Arts District Vision would be perfect. Hearing some Frankie Beverly, Earth Wind & Fire and Lauryn Hill will still attract visitors from all over the region to our great neighborhood producing the same great feeling.

Lumen8 served its purpose by highlighting the greatness of Anacostia for all to see.  For the reasons stated above, that can be both a good and bad thing, depending on who you ask. You got a sense from watching the visitors and reading follow-up articles that the spotlight has been turned on. There will be more Lumen8 type festivals East of the River in the future – that is a good thing. What we must do is participate more in the process. By participating, you are able to steer the conversation and play an integral role in the direction of change.
Posted by CHARLES WILSON at 10:31 AM No comments: 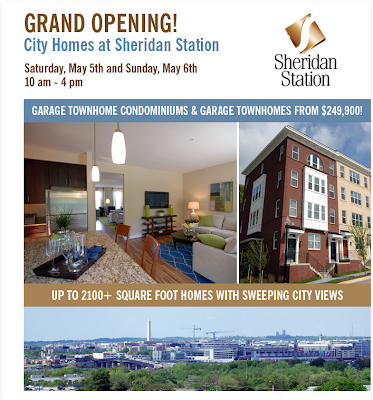 Posted by CHARLES WILSON at 7:49 PM No comments: